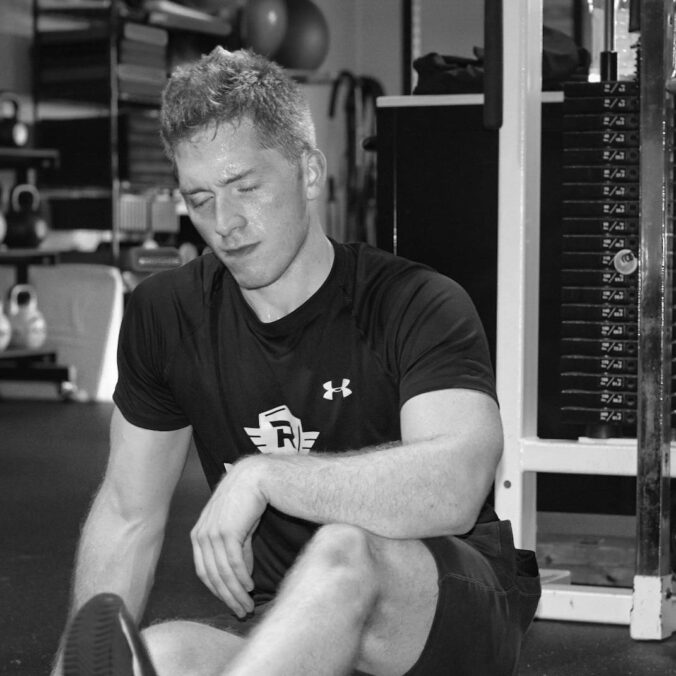 Autoregulation – Modifying workouts when you aren’t feeling your best

The biggest value in having a coach is in coming up with a plan B.

Anyone can write a program or find one on the internet, but it takes knowledge, skill, and even some intuition to modify that program on the fly.

Autoregulation how we modify your training program for any given day. It demonstrates both the science and the art side of coaching. I could gather a gather a bunch of data about you:

All of that might be useful at some point. I don’t believe that all of that would be useful at the same time. Use science to collect data and make what decisions you can, then use your intuition to make educated adjustments.

If you slept 3 hours last night just really aren’t feeling hot, you probably don’t want to do a program that assumes you’re well-rested and builds your strength.

Why? Because that’s how people break down.

My story on autoregulation

I started working out for ice hockey, but just got really into training science. I was more consistent with my training than my peers, so I saw more improvement. That motivated me to learn more.

I soon wanted to be as strong as possible. I looked up how to write training programs. I was supposed to be doing sets of 3, 2, or 1 rep. So I wrote a program that was that: 12 sets of 3, 2, 1 waves. Only big movements because they were also assumed important.

The outcome? I felt terrible and actually got weaker.

But I kept this mindset for years. Push harder, lift heavy, squat deep. Else you’re a wimp. This mindset works for some of the strongest people in the world, but it didn’t work for me, my body, and my lifestyle.

I remember after my second powerlifting meet, we went to a friend’s party that night and I was laying outside in the grass because my hips hurt so bad. And I’m allergic to grass.

The bright side of my story

So at this point, I decide powerlifting might not be for me. I start experimenting around with different things. Single leg training seems to help a lot, so I do exclusively that. But it gets boring. Then I start using “autoregulation”.

“Autoregulation” could be said as “self-regulation”. It is the body regulating itself. In this case, the training is being regulated to fine tune the physiological adaptation.

My boss wrote up a program for a co-worker and me. This guy was going through a similar cycle, unable to find a workout where he could challenge himself. We did swiss bar floor press, perhaps the most shoulder-friendly benching variation known to man. We would take our estimated 5-rep-max for the day and do it for sets of 3 until we couldn’t anymore, resting only 60 seconds between sets. We’d have a range of sets: a minimum of six sets and a maximum of twelve sets. We did the same set-rep scheme for rows, too.

And we blew up.

I don’t think I’ve ever been that big in my life. I got up to 193lbs, which wasn’t the cleanest I’ve ever looked, but it was exciting to train hard again.

We seriously did that program for at least three months because it kept feeling so good. When we tried to tweak it, though, one of us would break down. We didn’t know how to step up to the next level and still keep our bodies together.

But we were so close. After a few years of issues and somewhat boring training, we started to find something that worked. So we kept at it, dialed in some specifics:

And later on, I dialed in other specifics, like:

I can happily tell you that I now train regularly — two lifts, three cardio each week.

I first thought up this article when I woke up thinking about a session I had the previous day.

Hopefully you start piecing together a program as you read this. Find movements that agree with his joints, find exercises to improve those joints, and make sure he is cardiovascularly challenged.

So I wrote that program for him. He has done it for a few weeks. He’s still losing weight and he’s getting stronger, but he did have one setback with his knee two weeks prior that put him down for a little while.

Looked great on Tuesday, but on Thursday we have new data:

When I hear about what all he still has to do, I get stressed. I can’t imagine how stressed he must be.

So given this new information — this new person — what do you do?

I threw the program away.

We started with his planned rainbow medicine ball slams, which requires a bit of coordination and umph. They did not look good and he was getting really tired really quickly. So we stopped and just did some steady state cardio on the fan bike. Cue the sweating.

We still did his main exercise, the barbell Romanian deadlift, because he likes how it makes him feel “taller”. Hamstrings, glutes, and hip extension in general are good for promoting restfulness. Gravity is trying to smash you, so you need some muscles to hold you erect.

Then we ended with a little more biking. I was going to have him walk uphill on a treadmill to better prepare him for the hike, but the power in the building was out. You do what you can based on what you have available.

He left sweaty with more energy than when he came in. And I like to think he had a better idea of what he needed to do the rest of the day.

Why would I throw the program away?

The body can only handle so much stress. Training, work, traveling, preparing for traveling… it’s all stress. Normally he’s in a routine and can push his training. He was NOT in a routine, so pushing his training would be irresponsible.

His last knee setback was when he was jumping rope. He kept pushing after his form started to break down. There was nothing extravagant. Terry Tate, office linebacker didn’t come in to blast him. It was just a poor mishap.

He’s been training months for this hike he has coming up. Nothing is more important than that hike.

He’s about to be traveling latitudinally (not sure if that’s a word). This will put him in new time zones and mess up his circadian rhythm. More stress.

Not to mention travel in general. I would hate to lower his immune system even further than it already was. So instead, we give him a little cardio and try to boost it.

So even if he did make it through a hard workout without any hiccups, I’d be putting him at risk for setbacks in the coming few days. Getting sick during the trip would suck. I want to do everything I can to prevent that.

I’ve said before that we, as a species, largely know and understand the science of training. There are certainly advancements left to be made, but we have a lot we can use right now. The hard part is just knowing it all.

Be patient, it takes time. Treat each session like an experiment. If you try doing your normal lift and feels like crap, ask yourself why that might be? What stressors are present? Look at your sleep, diet, and workload. It might be no wonder you’re feeling worn down.

Then, try changing things. Take note of what seems to work and what doesn’t. Seek out help if you need it.

Helping Someone Solve Their Own Problems

Getting Good Technique Out of Ex-Athletes and Crossfitters