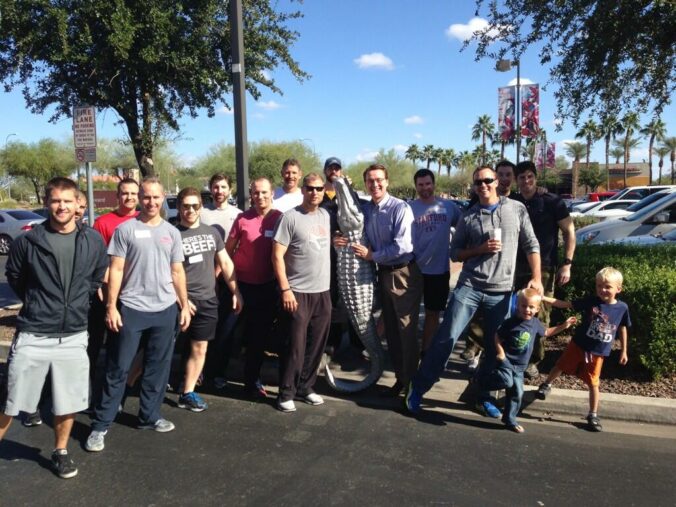 Impingement and Instability – A Recap

I spent this past weekend in lovely Phoenix, Arizona to reunite with old friends, meet the legend that is James Anderson, and learn all the things. Check out the Twitter action.

Called out on “Going Gainesville” comment by a true Gator Lover. Even Gruve’s boys can abduct with their R AB wall! pic.twitter.com/gPHhhA9iqq

Phoenix is seriously 40 degrees warmer than Indianapolis and seven thousand less percentage humidity, so I was immediately caught off guard. Though I didn’t have my physical therapist friends test me right away, I’m pretty sure the unpredictable environment would have stolen my neutrality, had any remained after four and a half hours on a plane.

I don’t get to put things in practice as much as most of the other attendees, so this overview is both for you to become aware of what the Postural Restoration Institute is doing, and for myself to cement the information.

I’ll give you some of the highlights of my notes in bullet form. Quotations will not be attributed to any one person to protect anonymity. You can assume I said the inappropriate things and that James said the intelligent things.

“PRI is neurology, but the mechanicoventilatory system is used to regulate neurology.”

This is a big deal. A lot of people think PRI’s system is just to strengthen some well-illustrated muscles. This couldn’t be further from the truth. The concept of neutrality is the centerpiece. This neutrality isn’t just a pelvis that is in the right position, but a brain that doesn’t perceive harmless stimuli as threatening. We can use these muscles, your shoes, your eyesight, and a million other things to get you neutral. My good friend and hotel-mate, Zac Cupples, gave me neutrality (albeit only for a short while) by softly saying, “Lance, just go neutral, bro.”

“Ron Hruska puts his hands on a joint – and he’s not thinking about that joint.”

That joint is the farthest thing from his mind. This ties into the previous quote. Neutrality is neurology, not biomechanics.

“Girl, that ganglia’s so hot.”

The new pickup line for women who are stuck in extension. James quickly illustrated this point to us by having my table neighbor, Maegan, stick her arms into some bands running vertically down a stretching cage. The bands represent the sympathetic trunk. Maegan’s arms represent closing of the posterior mediastinum from extension. An extended spine forces the vertebrae anteriorly, which compresses the contents of the posterior mediastinum.

A side note that I want to mention: this is why PRI is my crack addiction. James prioritized. He opened with the neurology talk and vividly has Maegan demonstrate to us the detriment of an extended posture. As someone who helps others learn anatomy, I admire the teaching ability of the presenters.

This was something Mike Cantrell opened my eyes to last month at Postural Respiration. A big breath is worth nothing if it’s perceived as a threat, even if you’re doing a manual technique at the time. The purpose isn’t to get as much air in as possible. So if you see someone fighting through inhalation with their neck muscles, you need to stop that. Slow inhales. Let it come in – don’t make it come in. The same can be applied to putting weight on your right leg. You don’t need to only have your left leg down for PRI techniques to work.

“When I wear these shoes, my arm freeze up.”

Frontal plane support at the heel helps you maintain neutrality. Your soft Nike Frees could be throwing you into a state of extension. Check out the Hruska Clinic recommended shoe list.

“When I squat the way the strength coaches tell me to, I can’t get off my right quad?”

We discussed the bro mentality that more weight is always better. James suggested looking at the objective outcomes like 40-yard-dash time and vertical jump and seeing what actually improves those measures.

“How come I’m squatting heavy, but my vertical is going down?”

“Make a neurological wedding between the left heel and the floor.”

Apollo Ohno has to turn left to be good. His right glute max is working well in the transverse plane instead of the general PEC patterned individual’s “sagittal plane only” right glute max.

This was something I had struggled with for a long time. Now the semantics make sense.

“The key to triplanar performance rests in a triplanar ZOA.”

The Zone of Apposition (ZOA) is not found unless it is found in all three planes. Thoracic abduction (a frontal plane translation), lateral flexion, rotary orientation, and extension all need to be taken care of. Abs are not a good thing if you have them without a triplanar ZOA. Use exhalation to get good abs.

Picture the spine as a flagpole. Each low trap can prevent the flagpole from tipping over (in the frontal plane). A right arm reach can orient the spine back to the left. It can also get you a triplanar zone if you couple it with exhalation. Hold the reach. Inhale. Then you get right trunk rotation with filling of the right mediastinum. Right low trap is important to consider because it’s being lengthened from both ends (scapula protracts, IRs, anteriorly tilts while spinous process moves away).

“Serratus without low trap day at the gym? Stay home.”

Right serratus anterior acts as a sling on the side of the chest. When this contracts, it pushes the thorax to the left side. A movement called left thoracic abduction. The left low trap pulls the spine into left thoracic abduction at the same time to reinforce this movement. And this is only the frontal plane.

“Breathing is gait and gait is breathing.”

If you don’t use the mechanicoventilatory system as a tool, you’re making things hard on yourself.

“Left pec is a stupid muscle.”

Why is he trying so hard to get air in? Just get a left ZOA instead.

I love PRI. It is my addiction. See you at the next course! They’re coming to Indianapolis next year…

This may have further confused my search. What should I do with the rest of my life? Well, I don’t know, but I want to be able to get people neutral. What’s the best avenue for that?

You Want to Give Me a Mouthpiece for My Foot Pain?

Tips to Aggravate Your Shoulder