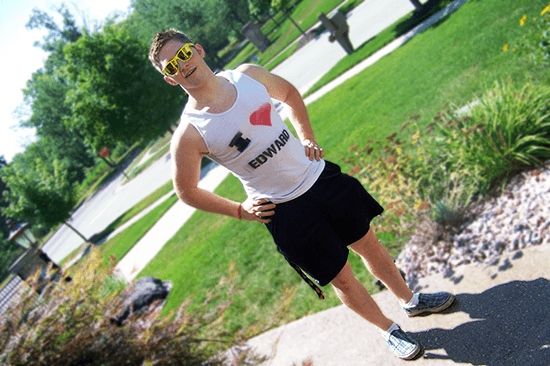 Me and my Pre-Warped Tour outfit

Book summary: Quote from Ariely: “Our irrational behaviors are neither random nor senseless—they are systematic and predictable.” (p. 239)

Review summary: Use relativity to your advantage. Set a new anchor and be more like Starbucks. Don’t switch between social norms and market norms. Keep your clients feeling positive emotions. Shut the doors that suck your life force away. Manage expectations.

Dan Ariely became interested in behavioral economics after he was hospitalized, sustaining injuries from an explosion.

If you want a visceral reaction, just think about how painful it must have been to have bandages ripped off of his entire body. Over and over and over again. As someone who has been in a moderately-severe motorcycle accident, the effect this thought has on my body is amazing.

“Predictably Irrational” is an amalgamation of Ariely’s research that provides insight into how our minds work. There’s a lot in this book, so I’m going to pick a few points I think are more applicable to fitness and talk about those.

Relativity is a great way to illustrate how reality is based on our perception of the things around us. Take this picture, for example. 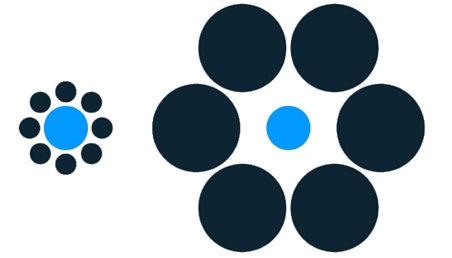 Both the blue circles are the same size, but the environment (black circles) around them make them appear much different.

Think about this in terms of selecting which gym membership you want. You have two options: (A) gives me 1x/month one-on-one personal training for $199 and (B) gives me 4 semi-private training sessions and full use of the gym during the month for $199. It’s difficult to compare A to B.

How can I use this as a fitness professional? I can set up training packages in a way that drive people to the most beneficial package. I could include a free group forum so that clients can keep themselves and others accountable. I can see them for shorter times but at a higher frequency. The possibilities are endless.

Starbucks and Paying for a Trainer

Mark Twain once wrote the following about Tom Sawyer: “Tom had discovered a great law of human action, namely, that in order to make a man covet a thing, it is only necessary to make the thing difficult to attain.”

I’m reminded of the Romeo & Juliet effect from Cialdini’s Influence: Stop telling me I shouldn’t date her if you don’t want me to date her. All you’re doing is inciting a (predictable) fire of (irrational) passion.

Ariely presents the concept of arbitrary coherence, which is really just another illustration of perception.

Let’s say I have someone who has never worked out in their life, never worked with a trainer, and never even had a gym membership. What do they know about how much working out should cost them? Nothing.

They’ve seen commercials on TV and the billboards on their commute that say, “Join LA Fitness now for only $30/month!”

“Wow, exercise is cheap,” they think. Then when they come to you, they say, “LA Fitness costs $30/month. Your LOWEST price is $199/month. That’s ridiculous!”

They can’t see the added value that you bring that makes you worth the extra money. They think all exercise is just exercise. Now you must show and tell them why you’re better. Remember, if you don’t convince them to stay, you can’t help them.

In order to avoid the negative effects of arbitrary coherence, think about Starbucks. They’re a coffee company, right?

Not quite. What are they really? Are Starbucks and Dunkin’ Donuts the same experience?

Starbucks sells pastries, tea, French presses, and whole coffee beans. They have all those fancy machines back there to make those Macchiatos, Frappuccinos, and Caffè Mistos. They sell a venti coffee, not a large coffee. For two places that both sell coffee, they couldn’t be more different.

Ariely calls this “setting” a new anchor and avoiding the old anchor. If they tried to come out and compete with a similar company selling a similar product, they would lose. But if they set themselves apart from the rest…

As a fitness professional, I must find a way to have more value. I must offer something that you can’t get anywhere else. I think the best way to do this is through personal interaction—show people you care about them. Look at Mark Fisher Fitness. They are the Starbucks of the fitness industry.

This section is about framing your relationship with your customers. A social exchange is like a friendship. A market exchange is like a business proposal. Ariely never defines a winner between the two, but he does make sure you know the difference and how they interact.

An example from the book is the scenario of asking your friends to help you move. If it’s a few boxes, or maybe just some of the big things, that’s fine. Asking them to help you move everything, however, is not okay. Pay someone and stop taking advantage of your friends. Similarly, asking your neighbor to get your mail for free while you’re out of town is acceptable. Asking him to do your taxes for free is not.

As a business owner, do I want to establish social norms or market norms?

Let’s say I establish a social relationship with my clients. They know I care about them. They love that about me. It’s easier to ask for referrals. However, it gets harder to ask for money from them. Harder to raise your prices. Harder to sell more services to them.

If I establish market norms, they expect my prices to rise occasionally and it doesn’t phase them. Conversely, I have more trouble establishing that personal relationship that gets great results in fitness. They aren’t as emotionally tied to me.

Either way has it’s advantages, but you can’t have it both ways. Don’t treat them like family and then sick your lawyer on them if their a few days late on their payment. It’s likely that they will feel betrayed.

I see the answer in fitness to be anywhere you want it to be. Personally, I lean more towards social norms because it keeps me happy and I attract the type of clientele that will stick around, but I don’t completely abandon market norms because I have difficulty asking for money as it is.

Get Clients Aroused (Wait, What?)

My friend, Jae Chung, and I just had a conversation the other day about hitting on the clients more.

Not actually hitting on the clients, but maintaining an appropriate level of banter. It makes the session more fun for the client; they don’t want to work with a dry personality. All you’re trying to do is to make them feel better than they would if they hadn’t come to see you. There’s a reason my Facebook profile picture has been up for so long: smiles, sun, and bright colors.

Man, I miss those sunglasses.

Ariely did some research on how his subjects perceive themselves and compared those responses to their responses when aroused (yes, in that sense of the word) and concluded, “They were simply unable to predict the degree to which passion would change them” (p. 97).

I helped a friend move things out of storage into his garage the other day. You’d be amazed at what people will hang onto. To an impartial outsider, it looks irrational—but it’s still predictable. Everyone does it.

Let’s take a trip back in time to 210 BC. Chinese commander Xiang Yu led troops across the Yangtze River in a fight against the Qin dynasty. Imagine yourself as one of Xiang Yu’s soldiers. Your group lands on shore and sets up camp for the night. After you lay down for bed, you start to dream of flames engulfing your ships. What a hellish nightmare.

Then you awaken to find it’s real.

You alert your sleeping mates and charge the attackers, only to realize that it is your commander who has set your ships ablaze.

He tells you, “Now that you have no ships, you only have two options: victory or death.” They went on to win nine consecutive battles.

Xiang Yu knew that if the option to retreat existed, his troops would not fight with everything they had. This is perhaps the most extreme example of closing doors that history has known.

How do we keep doors open in our daily lives? Well, my friend can hoard his old suitcase, or soldiers can leave an escape route open, but it can happen on a personal level as well. Do you have an ex who is still available to you? It’s not as hard to break up (appears temporary) as it is to cut them out of your life (appears permanent), especially when they were the one to dump you. Or you may have found yourself staying in a relationship for much longer than you should have because it’s safe.

Any doors that drive us crazy should be shut because they sap your energy away from the things that matter.

As it pertains to fitness, this principle means find new friends who support your healthy lifestyle goals. I need to be aware that keeping old doors open could be what is preventing you from reaching your goals.

If there’s vinegar in your beer, do you want to know about it? My prediction is no, at least not until after you’ve already had it.

There was an experiment that Ariely described where they let subjects taste test two different beers: one normal, one with vinegar in it. They controlled everything except when they told the subjects about the vinegar.

If a subject was told there was vinegar in the beer they had just drank, they were more likely to enjoy it. But if told prior to drinking, they had already decided that vinegar would make the beer gross.

Similar research has been done comparing Coke and Pepsi: people like Coke more, but only if they know they’re drinking more. The Coca Cola brand makes the product taste better. The Coke drinkers who knew what they were drinking had more activation in an area of the brain, the dorsolateral prefrontal cortex, that helps with associations among other things.

Drawing a correlate to fitness, this is a lot like the section on arousal. I want you to feel happy when you work out with me. So happy that you start to anticipate the happiness. I want it to be difficult for me to make you unhappy. I want to be the cue that triggers your habit to be happy.

Testimonials help this as well. As I’ve talked about before, this is social proof: “If it worked for other people, it can work for me.”

Instead of being wordy, I think one sentence from Ariely is a great summary of this book.

“Our irrational behaviors are neither random nor senseless—they are systematic and predictable.” (p. 239)

Pick up this book so you can learn to recognize these behaviors and use them to improve your results.

When was the last time you were irrational and should have seen it coming?

How Often Should I Change Exercises?