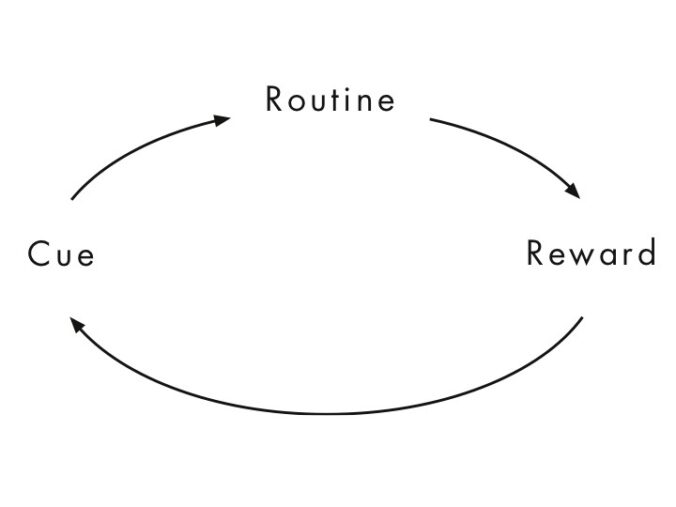 Book Review: The Power of Habit by Charles Duhigg

Book summary: Habits are initiated with a cue and reinforced with a reward. If you understand how habits are made, then you can adjust your behavior. Find the cue and reward for your habit, then change the routine.

Review summary: I initially listened to this book, and it was so good I picked up a hard copy as well. There are a lot of pieces of the book that I left out of this review. There are some great stories, especially the chapter about Target and the chapter about the gambler vs. the widower. Very user-friendly book with a plethora of citations in the back. Highly recommended.

Stuck in My Ways

In the past, every time I got hungry while I was at home, I would make some food and go lay down to watch TV while eating. This severely ate up my productivity (pun intended because I like them).

I could be on a mission to get things done. Wake up at 6AM, go downstairs and power through a book for hours. Maybe noon hits: “I need to refuel.”

Go eat: “Man that show is good. I better watch another.” And another. And another…

It’s hard to get out of a habit.

But once I recognized what was putting me into this loop, I was able to change. Now I can eat and go back to working. Charles Duhigg explains the process well in “The Power of Habit“, and I’m going to outline some key points for you. 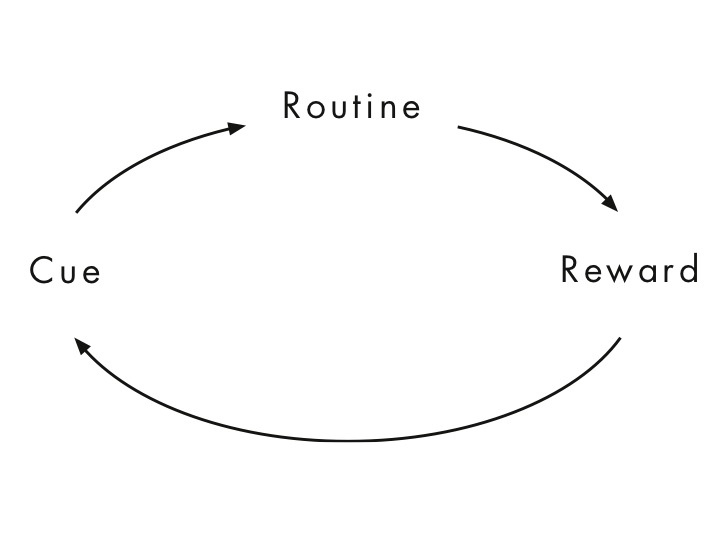 I talked about this a little in a post the other day over on the IFAST website, but habits work in a cycle of mostly predictable steps. A cue tells you to do something, then you are rewarded. The more you do this, the more ingrained it becomes.

How does it get stored? Well one of the older parts of our brain, the basal ganglia, takes care of that. Storing habits is easy to take for granted because they become innate – you just do them – but consider what would happen if you had to think every single time you did every single thing.

When you’re first learning to drive, you step in, adjust the seat, adjust the steering column, look to see where the lights are, look to see where the windshield wipers are, remember to press the brake before coming out of park, move your transmission because you accidentally shifted into neutral instead of reverse, completely stop at stop signs to make sure nobody is coming (hopefully you still do that), and stay in the right lane.

Now when you’re driving you jump in, start going as you’re closing the door, “slow down – look – we’re good” when you turn, lean your seat way back, loosen your grip on the steering wheel, listen to music, put on your makeup, eat a sandwich, and yell at the kids… all at the same time.

If every decision and observation we made was conscious, we would be less productive and easily overwhelmed. Our basal ganglia helps with that. 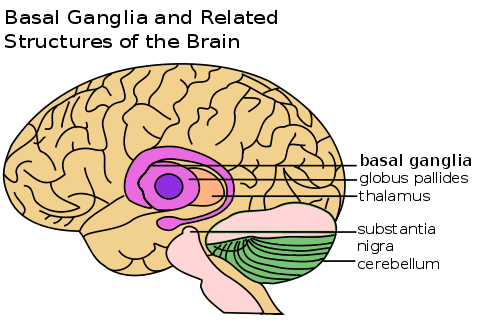 People with a damaged basal ganglia get locked up when they try to do simple tasks like choosing a path for their morning walk or ordering lunch at a restaurant. They can’t read body language because they aren’t quite sure what they should focus on.

A caveat, however, is that the basal ganglia can’t distinguish between helpful and harmful habits. If you repeat it, it shall stick. But if you learn to observe the cues that trigger your behaviors and the rewards you receive – the driving force – you can begin to change habits.

But that’s not the whole story.

How to Create New Habits

A cue and a reward are not enough to make a habit stick. Your brain also needs to crave that reward.

In exercise, the best example are people who start running. Usually they start on a whim because exercise is supposed to be good for you, but they continue because they crave that “runner’s high”. They like the way they feel and the person they become when their body releases endorphins (happy hormones). After a while, they start to anticipate this feeling and their brain gets excited. It gets easier and easier for them to reinforce this habit.

But what happens when they get stuck at work and can’t go for their run? They get irritable. (Though they would get less irritable than someone who’s routine is going for a smoke.)

If you want to create a habit, create a craving.

The golden rule of habit change: You can’t extinguish a bad habit, you can only change it.

No amount of will can take away that pattern in your brain, but you can build over it. Use the same cue and reward to take advantage of the pattern you’ve built, but change the routine.

Lets set up an example.

Soon enough, seeing a jelly donut creates a craving for a sugar high.

What if when you got a craving for sweets, you first ate an apple? You may still have the sweets after, at least initially, but you’ve begun building a new habit. Physiologically, the sugar in the fruit mitigates your body’s desire for blood glucose – i.e. your blood sugar still elevates, but to a level that is less detrimental to your health and body composition goals. The next step would be to have a handful of veggies when you get a craving for sweets. Then maybe fruit if you need it. You still increase blood sugar and you still feel good after, but you don’t need as much as you did before. You’ve then used a habit to please your pancreas and fight off type II diabetes mellitus.

But that’s not it.

You have to take into consideration why you’re craving your reward in the first place. Consider people who unleash their inner alcoholic when a relative dies. You can replace drinking with a new routine, but when they’re next relative dies, relapse is inevitable. They NEED alcohol to medicate them because otherwise they can’t deal with the stress. Or, more specifically, they FEEL they need to be medicated.

But when an alcoholic goes to Alcoholics Anonymous, they see other people. They hear their stories. They think, “I’m just like this guy… and it worked for him. Maybe it can work for me.”

Take out a piece of paper.

Draw out your own habit loop. A cue triggers a habit which leads to a reward which reinforces the loop.

Now what is going to be your replacement habit? Make sure it still gives you the reward you crave.

Draw your new habit loop. Make it bigger than the last one.

Do you believe you can change this habit? Why or why not? If alcoholics and gamblers can change, why can’t you?

What do you do around the time that you succumb to your bad habit? Is it at the end of the day when you’ve used up all of your willpower (see p. 137 in the book or this whole other book)? How can you avoid that moment of weakness?

You’ve got a great place to start from. Go make change.

This book is a staple in anyone’s library. Tell me your plan for habit change in the comments below.

P.S. Who do you know that wants to change a habit? Do me a favor and send this to them.

Quick Video on Improving Your Squat