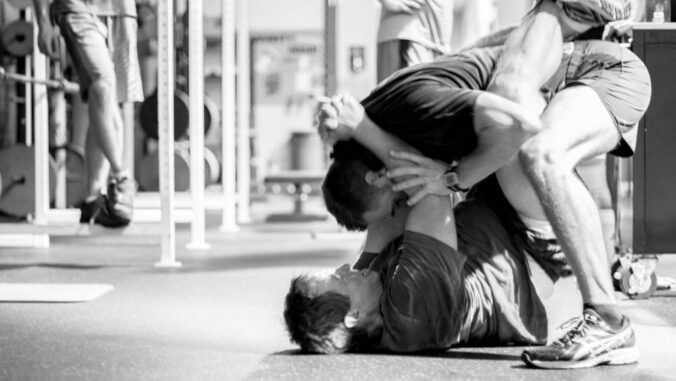 Specificity for Jiu Jitsu Fighters: Are you a fan of single leg jumps?

My Brazilian Jiu Jitsu fighter client and I had a recent exchange about single leg jumps and their efficacy for him. He was under the impression that I thought they were not very useful for him, which sparked a long response about the specificity principle of training.

Below is my response. I thought it would be a good piece to share and would love to hear your thoughts in the comments if you want to chime in.

All the best,
Lance

Actually I think it will be excellent for you. I also think you’re going to get a lot of it from your jits training.

The basic idea is that specificity is what makes you good. To be good at something, you need to practice it. But the caveat is that if you do something too often, for too long, with no variability, then you break down faster.

For example, if I wake up and do the same shit every day, I get really good at doing that shit. But it’s depressing and unfulfilling. On the contrary, if I get up and try out new shit–I meet a different woman on a weekly basis, I work different jobs, and I try out new recipes–then the novelty of my life keeps me curious about the world, but I never make a lasting relationship, I never get really good at work, and I don’t dial in my cooking ability to pull everything I can out of a recipe.

To determine the specificity of single leg jumps, you have to understand what goes into an experience: a task is performed by an organism in a specific environment. So the task (jumping on one leg) doesn’t change a whole lot. Neither does the organism (you). But the environment in a fight is nothing like jumping over a couple hurdles in the gym. These hurdles give you a stepping stone to developing the ability to do the task in a fight. They can be a great teaching tool because you learn the task in a safe environment where messing up isn’t the end of the world. You have time to re-evaluate and try again.

We can also get into the discussion of actual joint angles and direction of forces you’re applying to the ground. Ultimately, how often in a fight are you going to be on one foot and jump essentially straight up and down a few times. Minimal. So we do fewer jumps in a row to become more specific. I would argue that you’d get more out of learning to move laterally for takedown defense and general manipulation of your own body for your ground game.

But a single leg jump can still serve a purpose for a fighter.

Finding Comfort in the Uncomfortable: What a whiny high school girl can teach you about hard work