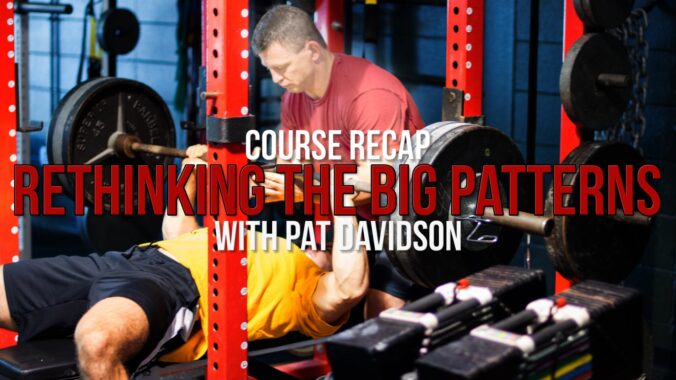 We had a grand ol’ time this past weekend here in San Francisco.

One of the top two meatiest PhDs I know came by to tell us how to create pro-exercise habit loops and build sensorimotor competency in high stress humans.

The other meatiest PhD I know was one of my old professors: Dr. Zach Riley.

This has become a guiding light in the tiny sub-space of fitness I reside. An antidote to the Imposter Syndrome afflicting many coaches who’ve made it past the 5 year mark. We might find ourselves saying…

How does that joke of a coach get his clients results?

Why can’t I get my clients to workout without me?

I feel like none of my clients are losing weight.

I can get everyone hip mobility except this one. Why won’t this work?

I’m just not sure that what we do matters all that much.

Inspired by Bill, Pat decided to write out his own model.

Pat could have just said, “Wow, that Bill Hartman is a smart guy. What a great lecture. I hope to be like him someday.” But he didn’t stop there. He also said, “I will take his advice.”

So he started writing out what he was doing. For the details of the model, you’re going to have to buy the seminar. I’m not going to give that away, but he basically already did in an article he wrote: “An Objective Biomechanics Model for Better Program Design”.

His “exercise plinko” as he calls it is a nice way to classify basically any movement you could want to use with your clients. It gives insight into physiological adaptations as well as mechanics. It considers kinematics and kinetics.

The best part, though, is that it doesn’t throw away anything you’re already doing that is working. It’s not a system that says, “Our stuff is the best and you need to implement this.” Instead, it says, “You’re already doing this, but this is how I look at training. Does that help?”

One of the most powerful forces we know of in biology is evolution by natural selection. It works so well because each change gets vetted (natural selection) and occurs slowly (genetic polymorphism). It’s the experimental method for genes.

You can, and should, change something sometimes. But you usually shouldn’t change everything.

Asymmetry in the Body

A few people are on the cutting edge of asymmetry in the human body, looking for a more mechanical explanation for why we see such predictable asymmetries.

The most well-known group is the Postural Restoration Institute. They emphasize the neurology of these patterns. In my experience working with it and taking over a dozen of their courses, this is a great way to look at things, but it’s not always the most HELPFUL way to look at things. This comes from my perspective and abilities as a strength coach and personal trainer. The quickest and safest way I can alter your system is through exercise.

The two I’ve talked to the most on the subject are Bill Hartman, PT and Joe Cicinelli, DPT. They’re finding that there are good mechanical explanations for these asymmetries. If you want to dive into that hole, apply to one of Bill’s Intensive weekends or get him to mentor you. He’s shaped me more than any single person in this world.

One of the ways that I use these mechanics these days by examining the pressures in the body. The body is mostly fluid. The thorax is mostly air; the abdomen is mostly liquid. Pressured air can lift a car. If you don’t consider it, you’re not going to get the changes you want.

So I ask myself:

If someone has a tight back, they have high pressure in the posterior half of their trunk. I want to increase pressure in the front of the trunk so the pressure in the back can diminish. This is a simple example to get you going, but start looking for it and you’ll see more of the asymmetries.

Gyroscopic motion can even help you understand the angular momentum created by the guts due to gravity. They are fixed to the posterior abdominal wall. Gravity pulls down. The guts anteriorly rotate. What is the direction of the subsequent force in the frontal plane?

This was the best image I could find to explain this right hand rule of physics. The anterior rotation of the guts the four fingers. The direction of the force is the thumb. I’m probably explaining this incorrectly, but I at least tricked myself into thinking I understood it. It’s a pretty cool idea.

Give your clients what they don’t have. If you don’t like doing it, you probably need to do it.

Too many people try to fill the top of the performance pyramid, spin their wheels, and don’t build up. I’ve always found the pyramid example to be helpful, but Pat had another metaphor: fill the holes.

If you’re leveling out ground for a construction project, you don’t put the new dirt where you already have dirt. You put it where you don’t have dirt: in the holes.

Let’s take a powerlifter as an example.

What does a meatball powerlifter have?

What does a meatball powerlifter lack?

You don’t want to steal the things that the meatball is good at. But not having enough of the other stuff can hold you back… at least from feeling better.

“I’m Just Here for the Dopamine”

What are the two fitness qualities that are easiest to change?

Get your newbies on the strength and aerobic endurance program. Measure what matters because what gets measured gets managed. Show them their progress. Create a habit.

How can you make people crave exercise?

My new goal is to gamify training. How can I incentivize my clients? Show them their progress!

Progression beats variance any day of the week for a reward system.

It’s already been two days since the course ended and my brain is still buzzing. I haven’t gotten this much out of continuing education in a long time.

I can’t promise that you’ll enjoy it as much as I did, but I sure did enjoy it. Read Pat’s articles, watch the seminar online, or go see him speak if you get a chance.

Now write out your model. I’ve started mine.