Foreword: This is part 1 of a four part series of posts. All parts have all been published, so here is part I, part II, part III, and part IV.

Over a month has gone by, and I’m still going through the material from PRI’s 2014 Advanced Integration course.

You know, it’s funny: during the course, I thought I was grossly underprepared to take much away. It was as if Ron Hruska, the primary presenter and founder of the Institute, was continously devouring my brain. By the end, he was just picking at a carcass. 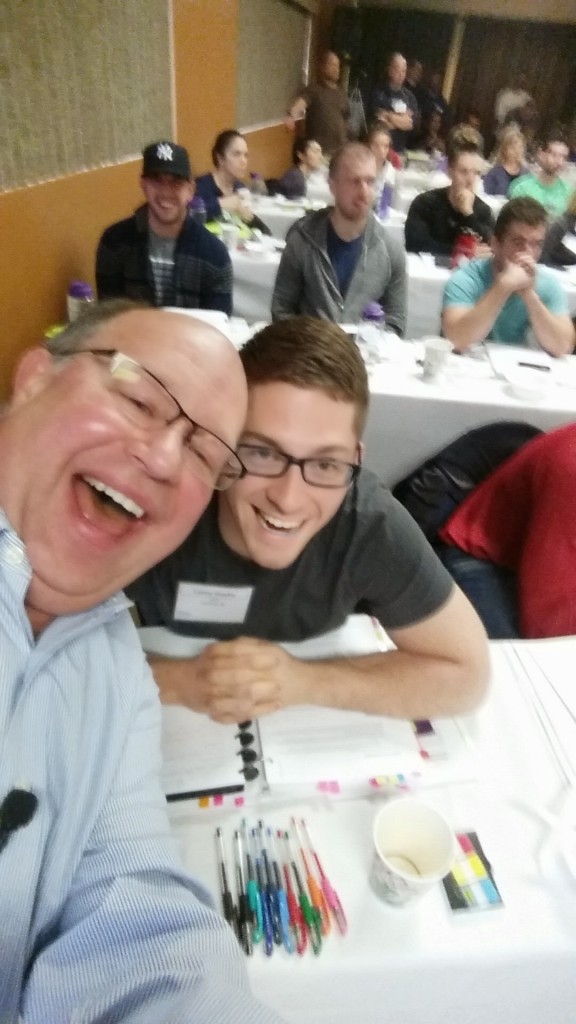 Look at that carnivore. And my neurotic note taking habits.

But after reviewing some things, I don’t feel as bad. There’s still a ton I missed, but there’s also a ton I gained.

Disclaimer: This post is for people who want to learn and explore about the human body. I don’t know this stuff well enough to make it simple. I also ask that you think of this post as more of a conversation, as I’m not tied down to most of the information in here.

A septum is something that divides something else. Septum transversum, for example, is your thoracic diaphragm. Every S bone (e.g. sacrum, sternum, sphenoid) has a septum.

While you’re fresh, I’m going to give you the summary sentence of the course:

DEFINITION. Flexion: the opposite of extension.
DEFINITION. Septal integrity: the something that divides something else is positionally uncompromised; possession of zone of apposition.
DEFINITION. Asymmetrical triplanar integration: multidirectional movement, i.e. gait.

Without septal integrity, you cannot alternate and reciprocate.

When we start putting L and R (left and right) in front of muscles is when we start to value the asymmetry that is inherent in humans. This is when it is particularly helpful to understand the PRI lingo of the chains of muscles: left AIC, PEC, right BC, right TMCC.

A real big moment for me was when Ron said that you lose septal integrity when you have activation of the exoskeleton. This is the PRI translation of the “shut off prime movers” type of thinking. This, to me, is also the use of a high-threshold bracing strategy when it is unnecessary.

For example, when you do a turkish get up with a high-threshold bracing strategy, the straight leg will come off the ground and the movement may look kind of like a sit up. This is counterproductive, but the goal of the turkish get up is to display multidirectional movement. So, a low-threshold (or lower-threshold) strategy should be adopted. I talked ad nauseum about this and other pieces of the turkish get up in this month’s Elite Training Mentorship.

Extension does not expand you.

These septums are what keep you repositioned/neutral. The abdominals do NOT. You need abdominals to perform, not to stand. This whole idea of septal integrity reminds me of “punctum fixum”, which I believe is from DNS and is not a topic with which I’m super familiar, so I could be way off base.

If flexion gives you septal integrity, then why in the world wouldn’t we default to that position?

That’s the short answer. The initial cause could be any number of sensory inputs that lead to threat perception, hypervigilant activity, and system extension. Stiff chambers make it stick.

And people won’t be able to expand chambers on day one, especially if they’re the type of person who needs manual work. Just keep reminding them. Start with getting air out and go from there. The initial focus is on the exhale.

Neutral is not the goal, it is simply step one. Getting neutral is not treatment because it does not teach me to expand chambers.

Asymmetry is necessary for chamber recognition. If you can change chambers, you decrease your sensitivity to change in other areas. The PRI hypothetical explanation for this is that when the spine extends, it is pushed forward into the sympathetic chain of nervous tissue, making it hyperexcitable.

Getting neutral may be enough for young children who don’t have years of abusive movement patterns ingrained in their mind. They need to try feeling their left side as well as they feel their right. Older, heavily patterned people need inhibition to expand chambers.

Advanced Integration (2014) was the course of long-term athletic development. There was so much talk about kids, growing up, and society. Rufus would have loved it.

How can a 14-year-old grow up if he can’t control chambers?

When I first started training people, sheesh was I neurotic. I was the king of overcuing and overdoing.

This is not something I regret, obviously, because it shaped me into a better coach and afforded me the ability to tell the intern on Saturday that he needs to stop talking so much when he’s coaching an exercise. “The reason I say this is because I was there, and more far gone that you are.”

Whenever I am training someone, my goal is to teach them something. But important to note: teaching is not lecturing. I don’t have to say something to teach something. In fact, saying it is sometimes the worst way to teach. Putting a client in the right environment can teach them what you want. Lee Taft has talked about this for years: “Now we’re going to play tag, but you can only reach across your body with your left hand to make a tag.” This is one of the reasons Lee Taft continually blows my mind.

How can I change this task and environment to accomplish my goals?

The new question I ask myself is, “How can I put in the least amount of physical work possible?”

Although I am predisposed to appearing physically lazy, I’d gladly work harder to get my clients better results. What I’ve learned is that I need my brain to work harder, not my body. I could literally spend my whole day writing about this and how it ties together PRI, behavior change, learning, teaching, coaching ethics, client retention, and cue selection.

Put them in a hammock and WATCH THEM SWEAT. Don’t touch them; let them figure it out.

Put them in flexion, and let them figure it out. They will mess up, but when they get it, it will stick. Whereas, if I cue and cue and cue and cue, they never develop autonomy. People in America love to be told what to do. Consequently, my ongoing battle as a coach these days is to convince my clients that they need to figure it out without seeming negligent and driving them away.

Here is some extra random cue information that I’ve been using since the course: 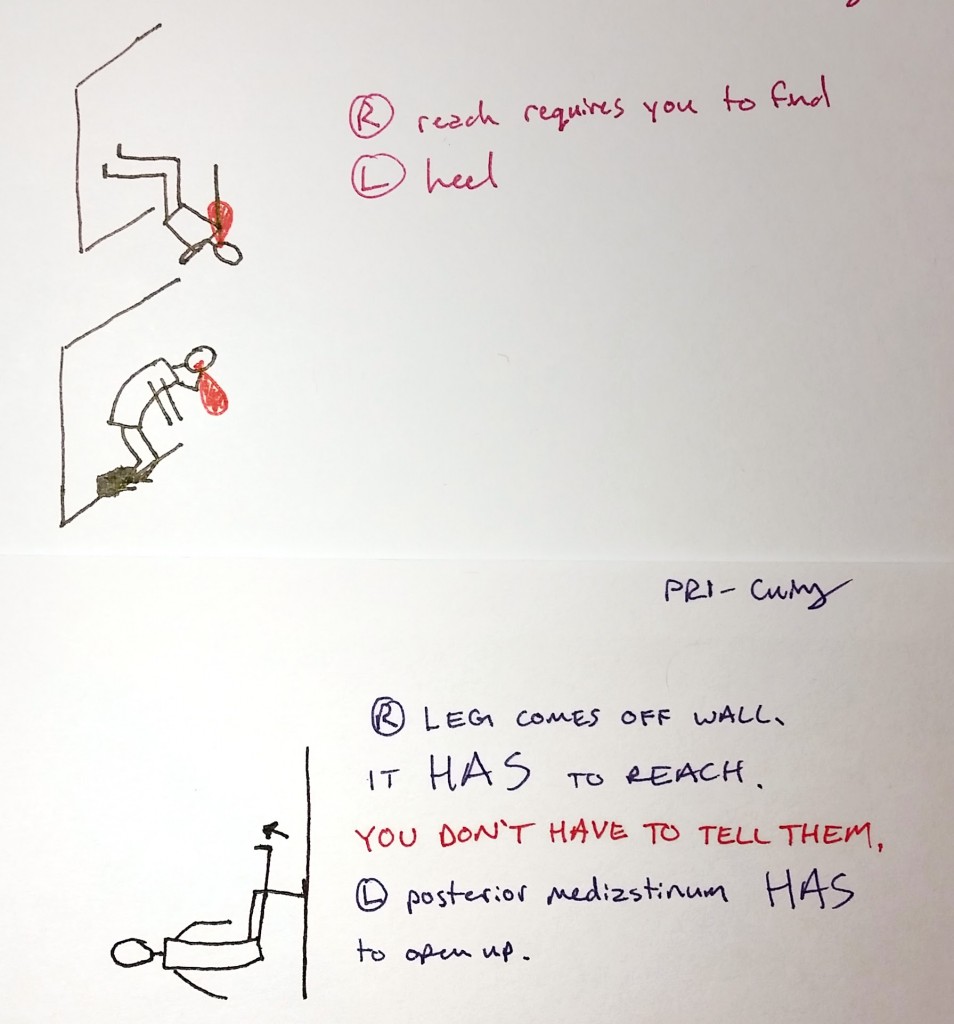 “I see all these people and they’re sending everything up to the iCloud… including themselves.”
-Ron Hruska

DEFINITION. Egocentric: centered around oneself.

This is the goal. Proprioception. Perception. Become aware of who you are. Learn about you.

Integration side note: How does this relate to Maslow’s (1943) hierarchy of needs? 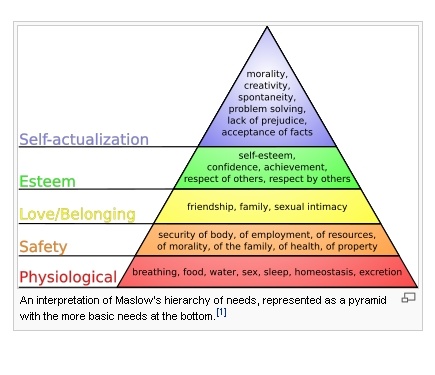 Lats are the anti-egocentric muscle. You use your lats to become less oriented. Tied with this, I don’t want you to use your hands as references. I want them to be free so that you can create because that’s what they were made for. We are, after all, bipedal, not quadrupedal.

Without septal integrity and the ability to recognize chambers, I can’t respond within normal limits. I can’t regulate or “go with the flow”. I’m super sensitive, or I don’t care about anything.

You need to be egocentric before you can deal with everything else.

I’ve talked about the cranium before. Here’s an image of the TMCC, or temporomandibular cervical chain of muscles, color coded for your viewing pleasure.

I’m not going to formulate too many words, but here’s some bullets on the cranium:

This last piece I want to mention is not really PRI, it was just something Ron introduced at a PRI course. It may remind you of the joint-by-joint approach to training. 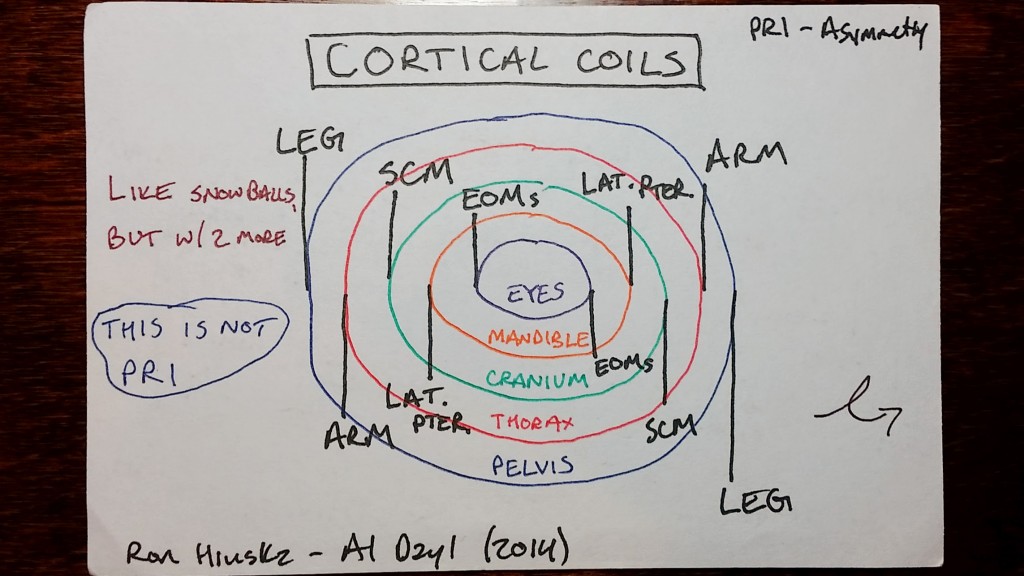 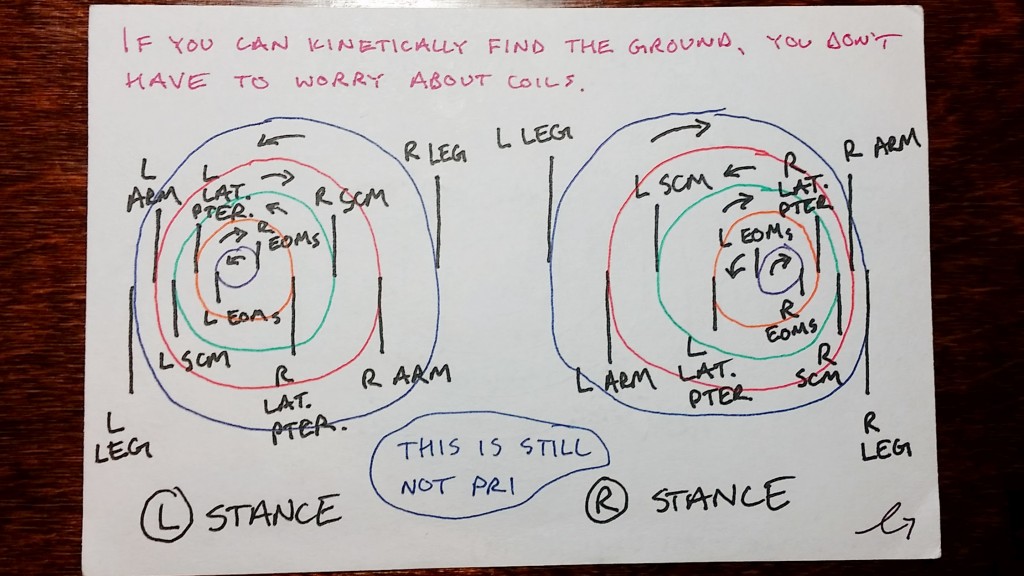 I want the pieces of my body to be able to dissociate. This means opposite rotation of sections of the body.

It’s like a five-balled snowman, where each ball moves opposite of the adjacent ones.

Ron called this the “cortical coils” and the concept is useful for anyone, whether you be a clinician or a coach. We want the pelvis, thorax, cranium, mandible, and eyes to be able to dissociate. This is gait.

I talked about this as well in my Elite Training Mentorship video this month. If you aren’t signed up, you better get on it!

Sensation, the Ground, and the Art of Coaching

One thing that I want to touch on is the concept of feeling the ground. Bottom-up sensation is necessary for top-down cognitive processing.

It’s hard to talk about this because it’s kind of wishy washy and subjective. The sensation of “feeling” the ground has to be felt firsthand to be fully appreciated, but sometimes you think you’re feeling your heels in the ground when you aren’t really doing so.

Some people I work with are completely out of tune with their body. I’m convinced that if I stuck them with needles, they wouldn’t feel it. I can ask these people during an exercise to “find and feel” their heels. If they say yes, but I can tell they’re still extended, I will make adjustments to get them out of this extension. If I am successful, I will then ask them if they can feel their heels more than they did before. The big tell here is not so much the words they respond with, but the emphasis they place on their response. This is a method of teaching where I lead the learner to the answer.

There are problems with this, most notably that I’m biasing them into a result and potentially only treating them with a placebo. To minimize this, I try to gauge the emphasis and non-verbal communication of their response. If their answer “yes” sounds more like “…yes?”, then I assume we haven’t achieved what I’m looking for. This is the art of coaching.

Also, I’m using internal cues, which I don’t believe are ideal for unconscious movement. I do believe, however, that they are a necessary prerequisite for many people to one day learn unconcsious movement competence.

Day 1 is the scary day. My theory is that Ron uses this to get you in the right mindset. I left this day feeling grossly underprepared for this course… and there were three more days left.

When I give someone a manual or non-manual technique/exercise, I’m not doing it to obtain flexion, exhalation, or right shoulder internal rotation. I’m doing it to teach them how to become egocentric, change chambers, and restore their neurology.

This was part 1 of a four part series of posts.