Guys, I get the bravado. I understand where you’re coming from. “He’s a pretty little girl because he doesn’t break parallel when he squats, bro.”

I could go on and on about how there are millions of things more determinant of one’s character than how low he squats. For the love of all that you value, though, stop being so thick-skulled! He could shave the squats high because of a number of pain issues, structural limitations, or past experiences.

The Restriction of the Vertical Shin

Squatting with a vertical shin is quite common. For example, if you don’t have adequate ankle mobility, you have to keep your shin vertical or you get a valgus collapse up the entire leg.

How about when someone has had a history of knee trouble? What if she’s 65 years old and has a reconstructed ACL? Squatting with a vertical shin will decrease the shear stresses on her knee, and shear stresses are the ones we as trainers are the most worried about.

The problem is, how deep can you squat with a vertical shin?

Try it out, I dare you. You need FREAKY levers (or powerlifting gear) to accomplish such a task.

So is our old lady with a bum knee going to be squatting below parallel? No.

Problems at the Hip

The multitude of problems that can happen at the hip is remarkable.

Torn labrum? The extra movement of the femoral head may be eliciting pain.

Unstable pelvis? The hip flexor muscles are getting overworked to try to get you SOME stability. Then they start screaming in pain because you’re working them like a slave driver.

Glutes don’t turn on? If your glutes aren’t turning on and your knees aren’t getting out, you can run out of room for hip flexion before you even get to parallel.

Bony impingement? Femoroacetabular impingement (FAI) is when there’s abnormally shaped bone in the hip joint. Forcing range of motion to “get deep” causes back pain and hip labrum tears.

Bony block due to poor positioning? This ties in with a number of previous examples, but what if the pelvis is oriented in such a way that the correct motion cannot be obtained? Maybe you can’t sit in to your left hip, so you shift your weight to the right and overload that knee.

Is This Really Necessary?

Do they even need to be squatting that deep? Aside from the potential aforementioned ramifications, maybe the reward just isn’t enticing enough.

Take a basketball player. Does he really NEED to get deep? Every time there is a reverse of the direction of motion, there is an isometric phase. This is the hole of a squat. Isometric training develops strength within 15 degrees of the joint angle trained. How many athletes can you think of whom need to develop extreme hip and knee extension power from such a great angle of motion?

I hear a lot of people tell others to check their ego before they start doing their half squats with insane amounts of weight. You are blaming this man for doing something that makes him happy. Leave it alone and stop dragging people into the sulking oblivion in which you live.

What if he struggles with depression and bending his knees with a ton of weight on his back makes him happy? Do your Supermanly deep squats on your own and maybe he’ll ask for your advice. If he doesn’t ask, he probably wouldn’t listen to your unsolicited advice anyways. 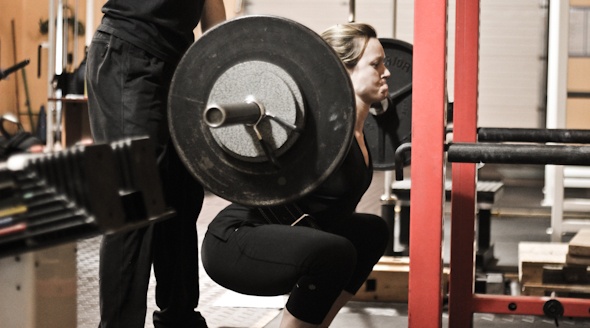 Maybe he’s very introverted. He doesn’t like to bother other people. Asking for a spot is the most embarrassing thing he could possibly do in the gym, so he squats high, where he’s confident he’ll be able to manage the weight.

Maybe he has been stapled to the floor before by a weight, which he blamed on going too deep, and he simply never recovered from this traumatic experience. The bar crushed him and he doesn’t want that to happen again because it hurts, physically and mentally. Some people are just more resilient than others.

So what if the guy squats a little higher than you do?

If you’re going to make assumptions, why not assume that he has a good reason for doing half squats instead of assuming he’s simply dumber and weaker than your alpha male persona.

The broscience has to stop. If the words “Go deep or go home!” are on your door, realize going deep is a choice, not a necessity. Stop pressuring people into changing the way they do things and you will gain the respect of many. Training full range of motion is an excellent philosophy, but “full range of motion” and “to parallel” are not interchangeable.

This isn’t meant to be an instructive post. I could talk for hours about POSSIBLE limitations. Rather, I want you to walk away with perspective. Quit looking at things through your own small filter and open up your eyes.

Most importantly, offer up support, not judgement. It will take you MUCH further.